'Escape' on a Luxury Cruise This Season Without Leaving Home: Meryl Streep Stars in New Movie Filmed at Sea

We can’t travel on a luxury cruise ourselves right now– or do many of the other things we love to do around the holidays - but “Let Them All Talk” lets us take an armchair escape during the break, and imagine ourselves along for a ride on one of the most famous ships afloat.
We couldn’t ask for better company for our silver screen journey. Starring three-time Academy Award® winner Meryl Streep, Academy Award® nominee and multiple Emmy® Award winner Candice Bergen and two-time Academy Award® winner Dianne Wiest with Oscar®-nominated Lucas Hedges (“Manchester By The Sea”) and Gemma Chan (“Crazy Rich Asians”), “Let Them All Talk” is directed by another famous Academy Award® alum, filmmaker Steven Soderbergh of “Ocean’s Eleven” series and “Erin Brokovich” fame.
Even with this host of Hollywood royalty, for a luxury cruise lover, the real ‘star’ of the film may be the Queen Mary 2. “Let Them All Talk” was filmed on board one of British luxury line Cunard’s epic ‘Three Queens’ ships on a single, actual Transatlantic crossing from New York to England last summer before COVID. 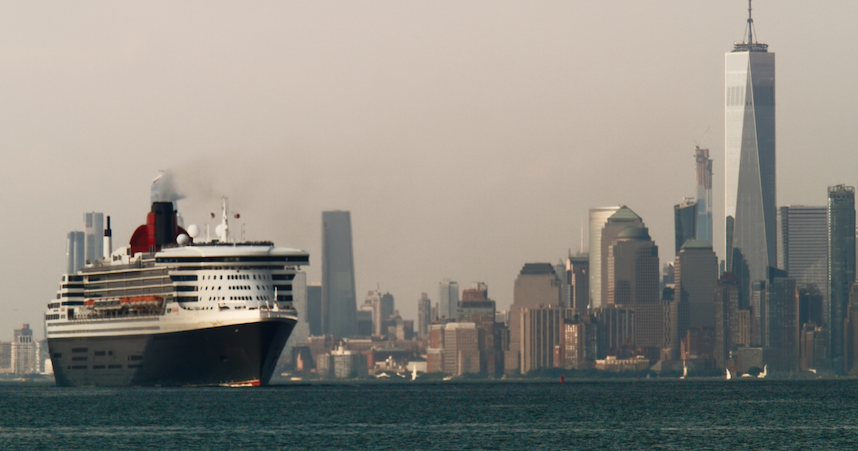 Meryl Streep plays a best-selling author invited to accept an award in England, but she can’t fly. Her new agent, played by Gemma Chan, persuades her to cross the Atlantic on the Queen Mary 2 as a ship’s lecturer, which will also give Streep’s character time to work on her much-anticipated new book. She insists on bringing her nephew (played by Lucas Hedges) as an assistant, and two best friends from her college days (Candice Bergen and Dianne Wiest), along for the cruise.

Things get complicated with competing agendas and comic twists and turns of relationships old and new. One friend hasn’t spoken to the author in years, believing her to have based the plot of her biggest best-seller on her own marriage break up, while the other, a grand-motherly free-spirit, tries to make peace between the old friends. Meanwhile, the literary agent is along on the Transatlantic crossing to find out what’s happening with the author’s next book, while the nephew struggles to juggle his author aunt’s needs with her friends’ demands – at the same time falling in love with the literary agent who’s trying to entice him into sharing what his aunt is writing.
A stellar cast like this can do no wrong – and all of this acting superpower in a witty, ‘comedy of manners’, is set against the backdrop of the legendary ship and its lifestyle.

Most of the film takes place on board the ship. Watch for the grandness of the Queen Mary 2 when the characters arrive at the Brooklyn Cruise Terminal on departure day, as well such loved on board locations as the Commodore Club, Queens Grill dining room, Queens Grill suites, the library, the Royal Court Theatre, and the decks outdoors with the genuine – computer-generated! - North Atlantic seascape beyond the rail.

Even the ‘extras’ who appear behind the main characters are genuine guests on the sailing who opted in to being part of the filming on board.
The film showcases the Cunard flagship's elegance, sophistication and style, and provides the viewer a real sense of the leisurely pace and beautiful setting of an iconic sailing and Cunard’s signature itinerary: the Transatlantic Crossing.

Sailing with the Stars

Meryl Streep: “There’s a lot to see and hear in this movie, and a lot that’s funny. And like midnight on the Mid-Atlantic-- just misty mysterious.”
Dianne Wiest: “The weather on the crossing was a wonderful thing. A day might begin with dense fog, so dense you could see nothing, neither the sea nor others. Then, the fog would lift and there would be a silver gray, the gray that filmmakers would do anything for, and then rays of sun would streak down and a brilliant blue appear and bits of light sparkling everywhere you turned.”
Candice Bergen: “The crossing on the Queen Mary 2 was heaven. It is a magnificent ship, beautifully maintained and elegantly designed. It was a perfect experience.”
Director Steven Soderbergh: “The ship looks as good on camera as it looks in person. It’s not like when you get up close and the camera has eroticized the ship. It really is that nice!”
Gemma Chan: “There is definitely a feeling of being away from the wider world, from city life and all its
distractions which I think you couldn't replicate in a studio. Every day had a rhythm to it that I think we all settled into - watching the sunset each evening and dolphin spotting were highlights.
“During the crossing, my character interacts the most with Lucas Hedges' character. It was fun to get to explore the ship and build a relationship whilst mingling with real passengers in the planetarium and, most amusingly, in the late-night disco.”

“Let Them All Talk” is being released just when we most need a reminder of what we’re missing while cruising is shut down – and a mood-booster for an altered holiday season.
HBO Max begins streaming “Let Them All Talk” on December 10th.

All Photographs by HBO Max
Copyright BestTrip.TV/Influence Entertainment Group Inc or Rights Holder. All rights reserved. You are welcome to share this material from this page, but it may not be published, broadcast, rewritten or redistributed.